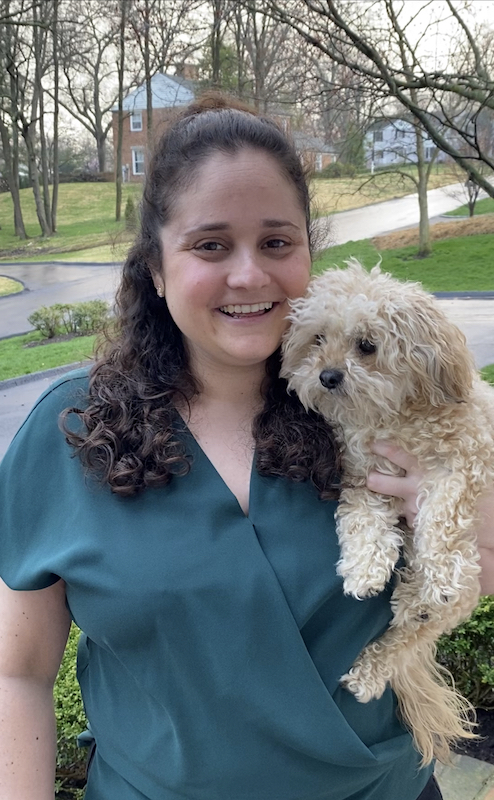 Jessica (“Jessi”) Gold, MD, MS, is an Assistant Professor and the Director of Wellness, Engagement, and Outreach in the Department of Psychiatry at Washington University in Saint Louis School of Medicine. She is a widely read and referenced expert on mental health among physicians and other health care workers, especially during the pandemic, as well as college students. She may be best known for her general audience original publications, in the Washington Post, New York Times, Forbes, SELF, and InStyle, and her research and academic publications in JAMA, the American Journal of Psychiatry, and elsewhere. She is also working on a book about healthcare worker mental health with Simon Element. She works clinically as an outpatient psychiatrist and primarily sees faculty, college and graduate students, as well as staff, and hospital employees. She has spoken at major national and international meetings and at grand rounds around the United States. She teaches and mentors faculty, both in and outside of psychiatry, students, and trainees.

Dr. Gold is a graduate of the University of Pennsylvania, where she earned a B.A. and M.S. in Anthropology, in addition to being a Benjamin Franklin Scholar and Phi Beta Kappa. She also completed  her medical degree at the Yale School of Medicine and her residency training in Adult Psychiatry at Stanford University, where she served as chief resident from 2017-2018. She has received numerous awards and accolades for her contributions in the areas of mental health and psychiatry.

She is a nationally recognized expert on:

Dr. Gold speaks about these and other adjacent mental health topics at national and international conferences, regularly participates in interviews for news outlets in all forms of media, and consults for publishing and media.

To contact Dr. Gold for an interview, to consult with the media, or for a speaking engagement, click here. 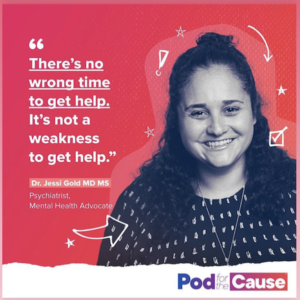 She also enjoys teaching about mental health topics and decreasing stigma through writing for popular press outlets. She has been featured in, among others, The New York Times, The Atlantic, The Washington Post, Time, Vox, Newsweek, Self, and InStyle, and is a Forbes contributor. She brings her expertise to social media as well, with a particularly active presence on Twitter (@drjessigold).

Dr. Gold has long been interested in the way we educate healthcare workers and how that contributes to their mental health. This interest was sparked when she noticed friends dropping out of pre-med due to poor advising, lack of mentorship, and undergraduate course requirements that did not line up with a medical career. She chose to study pre-med as a culture for her Master’s thesis in Anthropology.

This interest only became stronger throughout her medical training experience, as she learned more about depression and suicide statistics among medical students. She studied medical student mental health and access to care both locally at her medical school and internationally in China and the Middle East. Based on her experiences and research, Dr. Gold created resident-led medical student support groups as a resident at Stanford. As faculty, Dr. Gold has continued a research interest in this topic and recognizing needs and the barriers to getting help. This includes mental health licensing questions, a study that was published in JAMA, and the importance of self disclosure about mental health, among other things. She was also awarded a 3 year grant from the Health Resources and Services Administration (HRSA) of the U.S. Department of Health and Human Services to focus on healthcare worker mental health and resilience at Washington University.

The entire time – her personal experiences, those of her peers, and how that then trickles down to patients – inspired everything she does and continues to do. 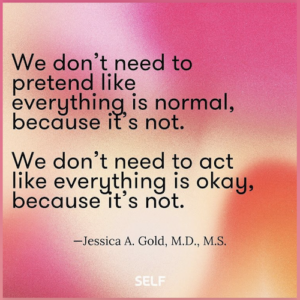 The value extends to the centering of narrative and storytelling in medicine. During medical school, her experience with mistreatment on a rotation led to her writing a piece entitled, “Alligator Hands,” that was published in the Annals of Internal Medicine and widely shared in the academic community. For her work, she received the Marguerite Rush Lerner Award for creative writing. This experience helped inform her future career, love of writing, and advocacy on physician wellness and gender harassment in healthcare. It also showed her the power of the written word to teach, inform, and change attitudes. Her written work soon expanded into journalistic pieces for Forbes, educational pieces for Self and InStyle, op-eds for The New York Times and The Atlantic, and narratives for NPR and Newsweek.

Dr. Gold’s advocacy expanded exponentially during the COVID-19 pandemic, when healthcare workers’ mental health was strained and experts were needed to comment in the media about their experiences. She is actively working on a book on healthcare worker mental health and burnout for Simon Element. Dr. Gold has been quoted in, among others, The New York Times, Bloomberg, Time, The Daily Beast, and the HuffPost, and has been featured in podcasts like CNN’s Coronavirus Podcast with Dr. Sanjay Gupta and NPR’s Life Kit. The L.A. Times featured a profile of her written by a high school reporter in their HS Insider, and she has also appeared on MSNBC and ABC.

For the one-year anniversary of COVID-19, the HuffPost asked Dr. Gold to respond to community questions as a mental health expert, and she participated in a panel for STAT news and SmartBrief to discuss healthcare worker burnout and mental health. Following an interview with her for an article in The Atlantic, award-winning science journalist Ed Yong said that talking to her felt almost like therapy for him after a year of covering the pandemic.

In addition to traditional media, Dr. Gold believes in and regularly uses social media for mental health advocacy, leadership, and as a method to combat misinformation. She is very active on social media, especially Twitter (@drjessigold), and was named one of Medscape’s top 20 physician influencers on social media in 2019. Social media allows Dr. Gold to further connect with and educate her patients on issues surrounding psychiatry and mental health, as well as put a face to psychiatry that can help destigmatize and humanize the field.

Dr. Gold’s expertise and clinical work also extends to college and graduate students. She feels they are often neglected from the conversation but substantially struggle with their mental health and lack access to care. Dr. Gold has guest-edited two issues of Current Psychopharmacology on this topic and written pieces in Self and The Atlantic about college students’ experiences. She is frequently asked to comment as an expert on college students across various media, from MTV to Teen Vogue. She also does a monthly Instagram Q&A with Rare Beauty, Selena Gomez’s beauty company, where she answers mental health questions and brings education on the topic to a younger audience.

The overlap between pop culture and mental health

Dr. Gold has a unique interest in the role entertainment plays in creating the image of mental illness, both positive and negative. She did research on the topic for an article in Academic Psychiatry. She has written a few pieces on particular television episodes’ portrayals of mental illness and used stories in the media pertaining to celebrities to educate on other mental health topics. For example, she wrote about what it means to “check in” for treatment after headlines came out about Britney Spears and her mental health struggles; how bipolar disorder impacts families in light of Kanye West and Kim Kardashian’s story; and a piece on Demi Lovato’s docuseries that revealed the toll being a mental health advocate or professional can have.

In addition to her writing, Dr. Gold’s experience in the field includes:

She has also had the privilege to use her platform as a Forbes contributor to interview celebrities about their mental health stories, from Leah McSweeney and Carl Radke at Bravo to Jennifer Sears and Charlotte Hope. In doing so, Dr. Gold hopes someone will feel less alone and mental health will continue to be normalized and seen as the same as physical health. She plans to continue helping the media craft their message about mental health illness and wants to prevent additional perpetuation of stigma in their narratives.

To contact Dr. Gold for an interview, to consult with the media, or for a speaking engagement, click here. 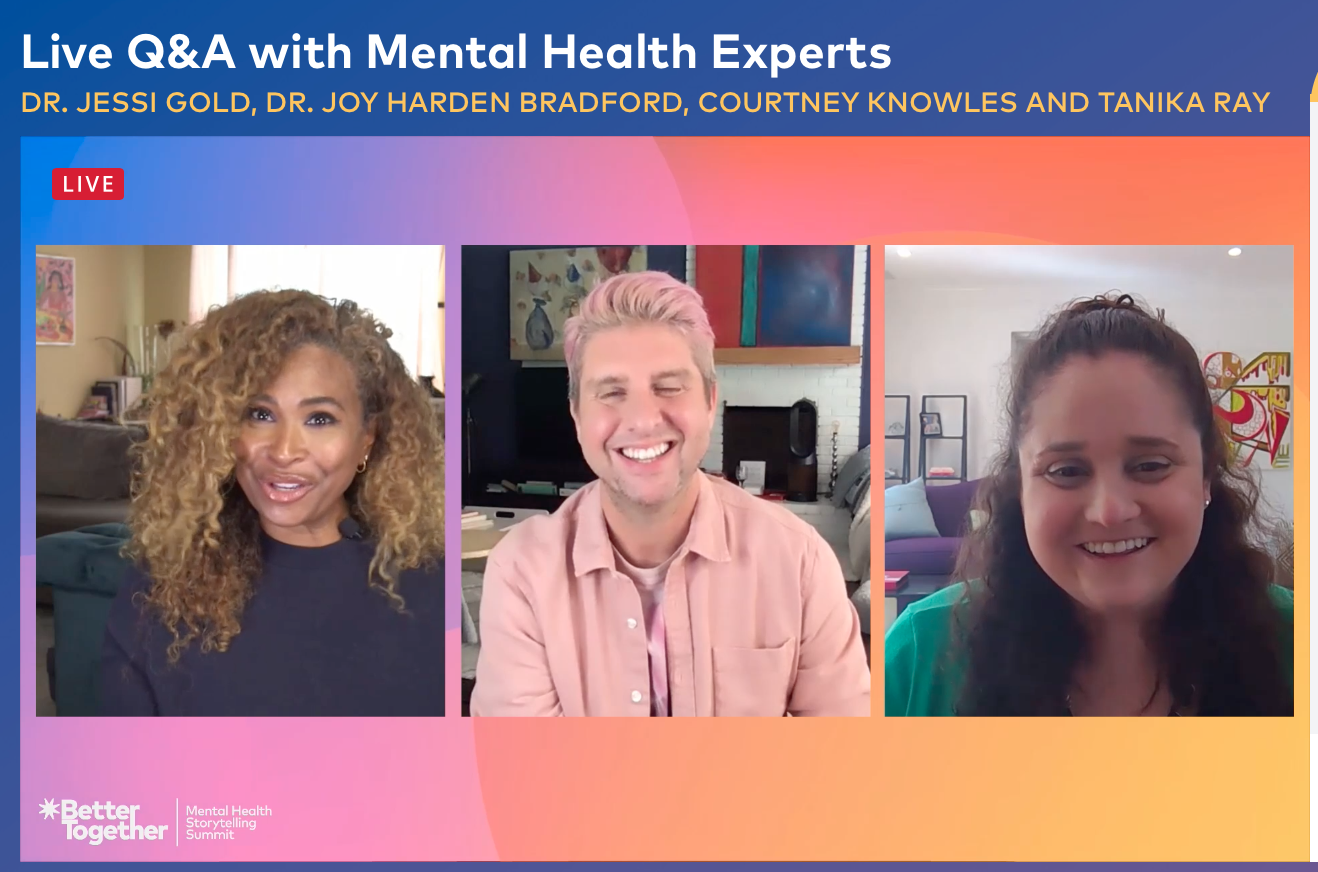